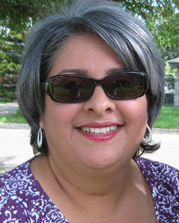 Linda Estrada has worked in various capacities in Donna ISD for 24 years; she currently is a campus secretary at Sauceda Middle School.

With the support of her family, Linda won election to an ESP at-large seat on the TSTA Board of Directors in 2007 and was re-elected in 2009. Along with fellow outgoing board members Lee Terrazas of Ysleta Teachers Association (El Paso) and Raymond Flood of NEA-Dallas, Estrada has worked tirelessly to focus TSTA Board attention on ESP issues. TSTA President Rita Haecker, a strong supporter of ESP members, worked alongside ESP Board members to develop and host the first TSTA ESP conference, which took place in Estrada’s hometown of Donna in September 2009. Two additional ESP Conferences quickly followed, in El Paso and Austin, and two more ESP Conferences were held the following year, in Houston and Dallas. This year, the TSTA House of Delegates voted to hold a statewide ESP Conference; its goal is to help ESP members realize their power to effect change – in themselves, and in their locals.

Estrada wants ESPs to know that being at-will employees does not mean that they are powerless to make change happen, and they should never accept injustice at work. She encourages all ESPs to, “Join TSTA and be part of the change that we all want to see.” Her goal is for all ESPs to be respected in their local associations and communities for the very important role they play in their students’ lives. Although her at-large position is coming to an end, Estrada will continue her work on the board as Region 1E president.

Other ESPs serving on the TSTA Board of Directors are:

Get ready to #VoteEducationFirst in November with these resources.

Help us determine where COVID-19 safety guidelines are not being enforced by districts.

We’ve assembled resources for Texas educators, support professionals, and other school employees about the COVID-19 pandemic.

We have more than 14,000 ESP members and many ESP leaders serving at the local, regional and state levels.

The Biden campaign has asked @NEAToday and @txstateteachers to adopt 2 phone banks this weekend — Saturday at 3 CT calling voters in PA and Sunday at 1 CT calling voters in WI (you can sign up here https://www.mobilize.us/nea/event/316902/). Let's show up BIG and get out the vote!

➡️Hey #TeamTSTA, nearly 75% of you have already early voted!🗳️ Our target is 100% by Friday night, so please reach out to all your members, family, neighbors and friends, and make sure they have a plan to vote and that they vote early! https://tsta.org/2020-election-timeline/
#VoteEducationFirst

We know it's a bit cold and rainy - but all of our sites are open including Drive Thru Voting! Vote right from your car, warm and toasty - and thank the election workers braving this weather for democracy!

Join us at 6pm CT for an NEA member-exclusive event with Dr. Jill Biden, who will share how the last days of the campaign look and what we can do to bring us over the finish line. Please RSVP right away to join us.
#VoteEducationFirst
https://secure.joebiden.com/a/conversation-10-28